Creatives are not always (one might say rarely) natural salespeople. Most have to learn how to effectively sell their work. But one of the last things they learn to do (if ever) is to sell themselves. It’s unfortunate, too, because interviews, job offers and negotiations are some of the most important conversations you will have in your career. You need to learn how to talk about your work, talk about the challenges you overcame, tell stories about how you approached problems and what you learned. And then once an offer’s on the table, you need to know what to do with it.

When I was running a creative department, it was shocking to me how few creatives actually negotiated when it came to a job offer. Or for those who did, how one-dimensional the negotiation was. I’d say (very unofficially) that 60% of the offers we put out were accepted or passed on as they were. No further conversation about the offer itself. Maybe another 30% would counter with a higher salary, usually ending with an agreement that was somewhere in the middle.

There’s a great post on Medium by Haseeb Qureshi about the rules of negotiating a job offer. He’s coming from a tech industry POV, but I agree with everything on his list.

You may be uncomfortable negotiating, especially if you’re a student or it’s early in your career. You probably feel like you have no idea what you’re doing. And at some point, the stress might feel so great that you just want it over with. Even if that’s true, don’t short-change yourself (don’t be unrealistic either!). The rules outlined in Qureshi’s post can help make sure you hold some of the cards. Even as a junior, you are an asset, and you have something that is of value to a company. As he points out, this is a business relationship. As a business, the agency want to maximize the value they get from it. As a creative talent, so do you. 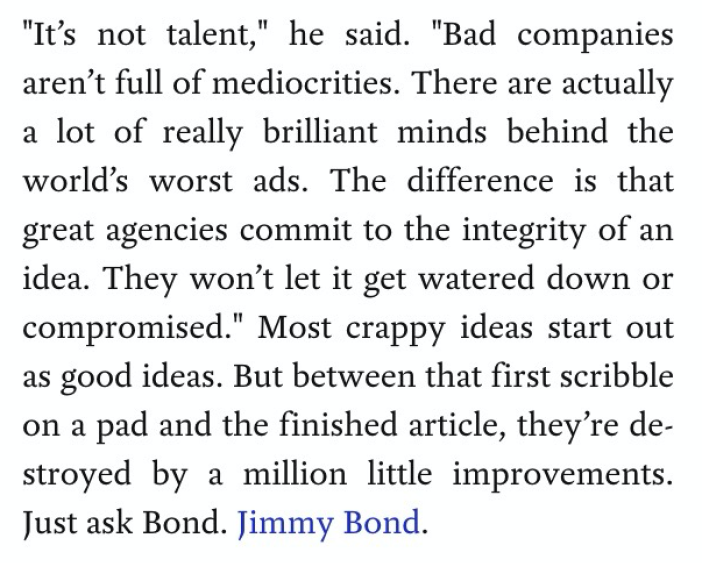 While I’m on the Cannes kick, here are my two favorite pieces of film from this past year.

In my mind, there was no better crafted, more moving piece of film in advertising than the Under Armor Michael Phelps spot. There is something Homeric about its beauty, about the hero past his prime but not ready to let it go. The way it celebrates both the beauty of the sport but, as its theme line says, what we don’t see—all the things happening in the dark. What it does so well is not just show us the training—we’ve seen that a million times from a million sports companies—but the brutal everything else that comes with being a historic athlete. The cupping, sleeping in the hyperbaric chamber, sitting in a tub of ice, the pain of consuming 12,000 calories a day. Lay on top of that the haunting song from The Kills, an unlikely but brilliant juxtaposition, and you have a wonderful spot.

“Is there a limit to how much living I can live with my life?” Old Spice has tread well upon absurd, over-the-top, slapstick humor for years. Sometimes it works well for me, sometimes less so. I love this one for the sheer hilarity of the copy and the quality of the production. Playing it straight and going high production value also separates it from the Dos Equis work. I wish I could have been a fly on the wall when they sold this spot to the client. More great stuff from W+K. 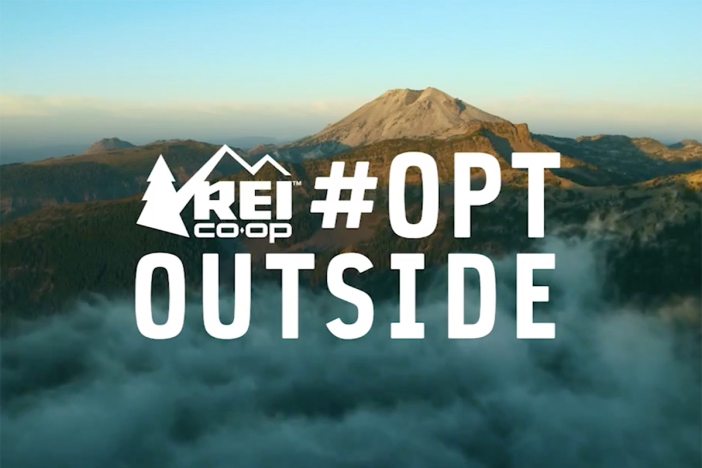 I was happy to see my favorite campaign from 2015 pick up a Titanium Grand Prix Cannes Lion. Much of the chatter from the festival was predictable (scam ads, the importance of technology, how to deal with the emotional resonance inherent in cause-related advertising). But a few of the big winners surprised me—I wasn’t sure this campaign was going to get the recognition it deserves. 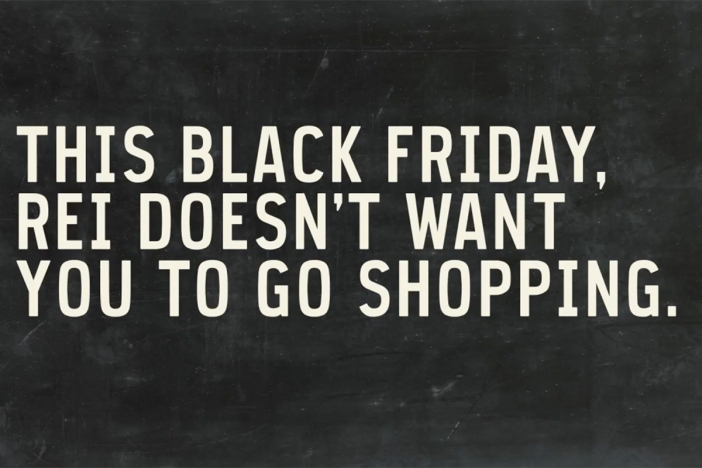 Closing its doors on Black Friday and encouraging people to go outside instead is a simple idea. But it’s also brave and, importantly, perfectly embodies what the brand stands for. It’s not latching onto a cause or topical conversation. It’s creating its own cause: nature>commercialism.

Beyond that, it’s very well executed. The design is great. The tone is great. And the hashtag is a fantastic bit of short writing. Kudos to the teams who pulled it off. Wish I had this one in my portfolio.

When you have a story to tell, you usually just tell it. But in advertising, the story is what gives your idea life. And for your idea to live successfully, you have to tell it over and over. You tell it to your partner, to your team, to your client, to your director—before you finally tell it to your real audience. You literally breathe life into your idea through these tellings, so you better get good at it.

Your job, as much as anything, is about articulation. That’s seems like a weird thing to say, but it’s true. You have to figure out how to articulate your idea in a way that brings it to life for different people. Some of those people will be creative people who understand what you mean when you reference a Wes Anderson style of art direction. Others will be MBAs who are very smart at business but don’t know Wes Anderson from Steven Spielberg. Or maybe you’re talking to a CMO who has about 2 minutes to hear your idea and just wants to quickly get the gist and understand how it solves her business problem.

Whatever the case, you have to know your audience in the meeting the same way you know your audience out in the world. What will resonate with them? (Hint: there’s a 99% chance that “it would be really cool if we…” won’t resonate with them.) Importantly, how can you articulate your idea so that what’s in your head is the same thing that ends up in their head. I tell my students this over and over in my scriptwriting class. How can you get what’s in your head into my head?

You’ll tell your story many times. If those first tellings don’t go well, that final telling will never happen. So don’t overlook those first tellings. Give a lot of thought to how you’re going to bring the story to life for your client, in particular. They should be as engaged by your telling of the story as they will be by the final execution.

We’ve all seen ideas that could be great fall flat in meetings. It’s usually because nobody gave any thought to how to present it. Or worse, didn’t think the idea needed anything more than to be read from a paper. Ideas do not sell themselves. Stories—vivid, engaging, entertaining—sell ideas. So tell a good story each time you tell it.

Just got a note from VCU Brandcenter that they have an upcoming series of info sessions in a few different cities: Richmond, San Francisco, Chicago and Portland.

Here are the details and registration link.

You may have seen this post from Linds Redding floating around. It’s gotten a fair amount of much-deserved press. It’s important, much more important than most of the stuff we post here. When you have 5 minutes, you should read it.

A Short Lesson in Perspective

A couple summers ago, Ashley Sommardahl from the VCU Brandcenter wrote a great post titled “How to Pick a Portfolio School.” It’s been updated to reflect their current numbers. Obviously, Ashley’s biased. But the numbers are what they are. And if you’re serious about a career in advertising, you really have to consider VCU.

Thought this article from The Guardian was worth sharing.

Stick to a routine. 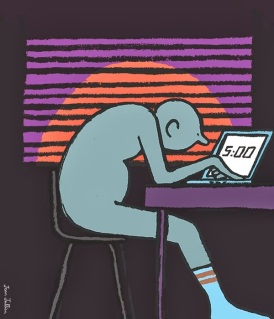 MAKIN' ADS
Create a free website or blog at WordPress.com.