Skip to content
Last week, I got to work with a musician who was at RISD about the same time Shepard Fairey was there. He said he remembered Fairey printing his Andre the Giant stickers and bringing boxes of them to the small concerts he loved attending. He’d give them to the band or to their road manager for free, provided they take them on their tour with them. That’s why, after a few years, with no paid advertising, these little stickers made by some design school kid in Providence began to appear all over the country.

I was in portfolio school the first time I heard about Fairey. It fact, I don’t even think I heard about him. What I heard was, “There’s this guy who makes these Andre the Giant stickers and gives them away for free. They’re pretty cool. Look, there’s one on the back of that stop sign over there.”

Years later, he’s the guy who designed the first presidential portrait to be purchased by the United States National Portrait Gallery before the President had been sworn into office. 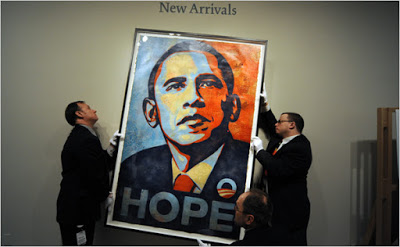 What this former schoolmate of Fairey’s told me was this: “I honestly don’t know if ‘Andre the Giant has a Posse’ is a great concept or not. It could be brilliant. It could be absurd. Maybe both, I don’t know. What I do know is that never quitting, and constantly being out there can make all the difference.”