When creatives present their ideas – either to clients or internally – we sometimes show a video clip as a point of reference. It might be to establish a mood, a look, a technique, anything.

But here’s my warning:

Don’t ever use someone else’s ad to set up your idea.

Think about it. Do you really want to set up your idea by showing a really awesome Nike ad? Or a Jeep spot? Or an Apple commercial?

Whether you mean to or not, you’re basically saying, “Our idea isn’t 100% original. But here’s a really cool ad we wish we’d done and want to rip off.”

It doesn’t matter if you’re presenting ideas for butter and you’re using a car commercial as a reference. It’s still telegraphs “not fresh” to the entire room. It says, “We want to be at least as good as this ad…but no better.”

Go ahead and use a documentary segment to establish a tone. Use a YouTube video to give a sense of energy. A film clip to help explain a technique. Do whatever you can to help the people in the room catch a vision of your idea.

But no matter how strong the temptation, don’t use someone else’s ad to show what you want your ad to be like.

When you have a brilliant idea and your client kills it, you have two choices:

If you choose 1, and your client kills that idea, you have two choices:

If you choose 1 again, and once more, your client kills that idea, you’re still left with two choices:

The difference between great creatives and mediocre creatives is the ability to choose 1 again and again.

When you have a story to tell, you usually just tell it. But in advertising, you have to tell it multiple times—to your partner, to your team, to your client, to your director—before you finally tell it to your real audience.
If those first tellings don’t go well, that final telling will never happen. So don’t overlook those first tellings. Give a lot of thought to how you’re going to bring the story to life for your client, in particular. They should be as engaged by your telling of the story as they will be by the final execution.

Too often I see ideas that could be great fall flat in meetings because nobody gave any thought to how to present the idea. Or maybe they didn’t think the idea needed anything more than to be read from a paper. Ideas do not sell themselves. Stories sell ideas. So tell a good story, each time you tell it.

There will be multiple times in your career when the client does not go with the agency recommend. They’ll choose another director. A different illustrator. The execution they feel a little more comfortable with, even though the one you’re recommending is all but guaranteed to get you a Lion at Cannes and have the country tweeting about their business.

To be fair, agencies should always be prepared for this. If we don’t show bad work, our clients can’t buy bad work. But sometimes we have a campaign, or director or promotional partner we’re just dying to work with. And the client chooses the runner up. Or the runner up to the runner up. Ideally, we’d be happy with that. Because if it’s on the rail, it’s for sale.

But there might be times when the agency pushes back just a little. “Really? Are you sure you want to go with that campaign? Can you tell us why?”

A good client, who sees the agency as a partner will explain themselves. Even if they’re not very clear, they’ll try. “I just feel more comfortable with this director because he’s got a lot more experience in our category.” Or, “I think this campaign will resonate better with our target market.

But when the response is, “Because I’m the client,” watch out. That’s not too far off from a husband telling his wife to have his supper ready when he comes home from bowling with the guys “because I’m the man in this house.”

“Because I’m the client.”

Those are dangerous words. Because they state the obvious, explain nothing, and are an attempt to put you in (what they perceive to be) in your place.

“…It just doesn’t matter how good the idea is unless you can persuade the person on the other side of the table to feel the same way.”
-The Art of Presenting
by Peter Coughter, Jr.

Some other great tips on presenting can be found in his article here.

Recently, Jim was writing about audiobooks, and it got me thinking.

A few years ago, I listened to Tom Wolfe’s book, A Man in Full on tape. (Yes, cassette tape.) It was read by David Ogden Stiers. Great actor. Great book. But having him read it to me was a little dull. As Jim wrote, it kind of felt like cheating to be listening instead of reading.

Last week, I finished listening to another audiobook. This one was The Goal by Eliyahu Goldratt. A cast of actors performed for about 10 different characters. The production was complete with Foley effects from background music on the radio to doors slamming. When someone was on the phone, they sounded fuzzy. When they were in the other room, they sounded distant. When they interrupted each other, you actually heard. It less of an audiobook and more of a radio play. They weren’t the best troupe of actors, but the whole experience was far superior to famous Steirs reading famous Wolfe.

The Tom Wolfe book is like the creative team that says, “This idea is so good, it speaks for itself. Feast your eyes on this brilliance.” No one’s questioning the talent or the substance. But outside of the creative team, no one’s really invested in it either.

The Goldratt production was the creative team who took a great idea, sold it, and got it produced.

(In Tom Wolfe’s defense, the jacket design for A Man in Full – and just about anything else – beats the cover of the Goldratt book.)

A while back, I wrote a post about the importance of language and framing, about how small changes in language can compel us to make larger shifts in the way we think about something.

I’ve recently gotten hooked on listening to audiobooks. I love them because they allow me to “read” while I’m driving or working in my yard. The other day, I noticed something: rather than a “Read by…” credit on the cover of the audiobook, it said “Performed by…” 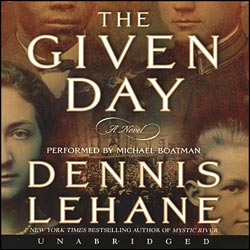 I used to consider audiobooks a form of cheating. Someone was reading the book to me instead of me doing the work. It felt kind of lazy. I imagine this is one of the big hurdles for the audio book industry.

But “Performed by” frames the audiobook in a way that gets me over this hurdle. I’m not just having it read to me, I’m taking in a performance. It’s as different as a play or a film. In this case, they hired actor Michael Boatman, who reads the narration and acts out the parts, giving voices to all the characters. It’s a true performance. It changes how I think about the form and how I enjoy it.

In addition to how we frame things in the work we produce, the words we use to present it, particularly to our clients, can make a big difference.

We might think something is “cool,” but a client might be more interested in hearing that it’s “relevant to the target.” Same meaning, different language. Is an idea “weird” or is it “breakthrough?” Is a design “clean,” or does it “communicate more clearly?”

If someone had told me this when I was a student, I would have said, “Whatever. I want to sell my work on the strength of the ideas, man.” I had much to learn.