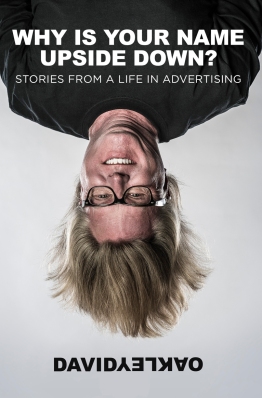 We have a list of books we recommend over there —-> on the right side of the page. Lots of stuff that might inspire you or make you a better creative. Here’s one that might do both, and will get you excited to be in an industry as fun as ours. Why Is Your Name Upside Down? Stories from a Life in Advertising by David Oakley.
Oakley is the president and creative director at BooneOakley, a small independent advertising agency in Charlotte, NC. It’s a really good shop with nice, talented folks. Full disclosure here—I’ve met David and many of the people there, so I’m probably a little biased. Even so, I laughed much harder at this book than I thought I would. After 15 years in the business, sometimes reading books about the industry feels like, well, work. This one feels more like just grabbing a beer with a dude who tells really good stories.
BooneOakley opened with a ballsy, attention-grabbing stunt. During the 2000 presidential race, they ran a billboard that said “Gore 2000.” But what it showed was a photo of George W. Bush. Calls from the media started immediately. All the big names wanted to know who had screwed the pooch so badly. CNN, CBS, ABC, NBC, FOX. Oakley even received a call from the Vice Chairman of the Republican Party. Only after a few nervous days of incredible publicity did they reveal the punch line: the board was for 123hire.com, with the copy: “Today’s job opening: proofreader.” A really simple prank that turned a local billboard into national media coverage.

That is the M.O. of Oakley—he likes to take risks, make his clients famous and have fun doing it. Some of the stories here are how some of BooneOakley’s best, most over-the-top ideas came to be. Some are stories from the trenches of running a small agency in a small market. And some are personal stories from David, how he got into the business, how he met his wife (who also works with him), a few other random but always entertaining stories from his past. If you were to cut a trailer for a movie version of this book, you’d see a giant muffin fall on a car, a professional golfer tee off on a biscuit, a Silence of the Lambs basement moment as Oakley tries to buy a ping pong table for the office on the cheap, a client fired via tweet (don’t we all wish sometimes), a condom on a dog, a pole dancer, a live earthworm eaten by a human, some terrible golf, Celine Dion, Roseanne Cash, a kidney stone passed and what is certainly the only sex doll thrown from a rooftop during a new business pitch. And that would just be the 30-second cut of the trailer.
You don’t have to be in advertising to enjoy these stories. But if you are, you might actually learn something while you’re laughing your butt off. There’s a method to Oakley’s madness, and he drops some important lessons along the way. Even his craziest stories have morals to them. Well, most of them do. And you’ll be treated to some delightful writing, such as this: “Our moods were swinging like a pair of donkey balls.” (Surprising, visual, simple—everything a good simile requires.)
The stories are so random and improbable that you know they’re true. Advertising is random and improbable. I’ve had many moments in my career where I’ve stopped to look around and wondered, “How the hell did I get here?” I could totally relate. And what comes through more than anything is that Oakley is a guy who loves what he does. He loves the people around him, and he’s built an agency, a body of work and now a book that shows that advertising can be a blast. It should be, if you’re doing it right. And he shows that, despite the rumors, there are some really good people in this industry.
Advertisement