But here’s the thing:

Michael Jordan was famous for staying long after practice to work on his free throws. Peyton Manning was known for watching more tapes of opposing teams than anyone else in the league. If Michael Jordan and Peyton Manning think it’s worth their time to practice, so should you.

That doesn’t happen without practice.

When you have a brilliant idea and your client kills it, you have two choices:

If you choose 1, and your client kills that idea, you have two choices:

If you choose 1 again, and once more, your client kills that idea, you’re still left with two choices:

The difference between great creatives and mediocre creatives is the ability to choose 1 again and again.

I have argued with clients before. I have seen other creatives argue with the client. I have even seen account people and agency presidents argue with the client. And here’s what I have learned:
You cannot win an argument with the client.
Why? Because it is the client’s money that’s been spent. It’s the client’s job and reputation that are being put on the line. So no matter how idiotic their rationale may seem to you, you can’t really win an argument with the client.
That doesn’t mean roll over. I’m not saying be the artless hands of an irrational mind. But don’t argue.
If you argue enough, the client will ask to have someone else put on the account.
Or you will lose the business entirely.
It’s hard to do great work when you don’t have an account to do great work for.
If their reasoning really is stupid and you combatively point out the gaping flaws in their logic, they may yield to you, and you’ll end up getting your way. But they’ll resent you for it. And it will affect your next project, or whether you work on the account again.
Communicating takes more effort than arguing. Helping the client see your point of view takes more effort than trying to put the client in their place. Understanding the client’s point of view takes more effort than being unyielding on your own.
I’m not saying compromise your creative integrity. Just don’t think you’re above the client just because you’re an artist.
You have to be 100% willing to yield to the client. That doesn’t mean yield to them 100% of the time. It means you have to understand that it’s their money, their decision to work with you, and their campaign. Being open to compromise doesn’t always mean letting the work become terrible. It can mean that. But it doesn’t always have to. Occasionally, it can mean making the work even better.
Sometimes you’ll want the client to fire you. That’s okay. Sometimes you’ll actually fire the client. That’s okay, too.
The goal is to do great work for people you like. And you can’t do either if you’re arguing.

As we’ve said before, one of the myths in the industry is that the client is stupid. Thinking like that won’t help you do or sell better work. Don’t believe it.

But then there’s this brilliant side project we found that beautifully illustrates client feedback. And we remember we’ve been in meetings like this, too.

Our friend at Graphicology is redesigning the flags of the United States on his blog. This post gives a brief and interesting history on the Arkansas flag. He shows how this…

Someone needed to add a fourth star so one group wouldn’t be offended. And, of course, the name of the state had to be prominent in case couldn’t figure out which state the flag belonged to. It’s pretty amusing to see that we’re not the only ones who’ve had clients giving their suggestions and mandates to clutter up clean design.

There will be multiple times in your career when the client does not go with the agency recommend. They’ll choose another director. A different illustrator. The execution they feel a little more comfortable with, even though the one you’re recommending is all but guaranteed to get you a Lion at Cannes and have the country tweeting about their business.

To be fair, agencies should always be prepared for this. If we don’t show bad work, our clients can’t buy bad work. But sometimes we have a campaign, or director or promotional partner we’re just dying to work with. And the client chooses the runner up. Or the runner up to the runner up. Ideally, we’d be happy with that. Because if it’s on the rail, it’s for sale.

But there might be times when the agency pushes back just a little. “Really? Are you sure you want to go with that campaign? Can you tell us why?”

A good client, who sees the agency as a partner will explain themselves. Even if they’re not very clear, they’ll try. “I just feel more comfortable with this director because he’s got a lot more experience in our category.” Or, “I think this campaign will resonate better with our target market.

But when the response is, “Because I’m the client,” watch out. That’s not too far off from a husband telling his wife to have his supper ready when he comes home from bowling with the guys “because I’m the man in this house.”

“Because I’m the client.”

Those are dangerous words. Because they state the obvious, explain nothing, and are an attempt to put you in (what they perceive to be) in your place.

This image was found here. A while back we featured a similar post here. We used triangles. But you get the idea. 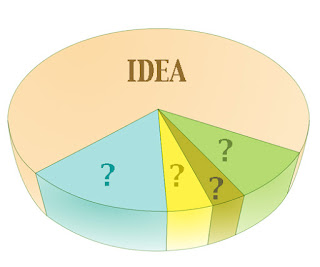 Lately I’ve been seeing student books that feel like they’re full of high-level case studies. Videos that present the idea but don’t actually explain how it comes to life. After nailing a big idea, you’ve got to figure out the minor details. Not every big idea translates to a great ad. Without thinking through the small things, you’ll never know if your big idea is anything more than a great starting point. When it comes to executing a campaign, an idea isn’t everything.
The strategy matters
Clients don’t want ideas that come out of left field, even if it’s a great idea. Your campaign needs a foundation. You need to be able to explain the insight that led to your idea. Be perfectly clear about why this idea will be an effective one for the client and the target. When it comes to thinking strategically, an idea isn’t everything.
The client matters
Don’t forget that we work in a service industry. Our clients aren’t in the business of supporting the advertising industry. They’re in the business of making profits and selling products. They’re only interested in one type of idea – the kind that grows their business. When it comes to client needs, an idea isn’t everything.
The budget matters
A client isn’t going to toss more money at a project because an idea is so freaking awesome. Doesn’t matter how much they love it. If the best idea goes over budget, the next best idea moves into the starting line-up. Or, even worse, you’re asked to rework your great idea until it’s nothing but a sad shell of its former self. When it comes to sticking to budget, an idea isn’t everything.
The presentation matters
Part of the job is getting clients pumped up for your big idea to become a big reality. That may mean some theater. It may mean bravado. It takes a different approach for every client and every presentation. Just remember, clients weren’t there during your brainstorm sessions. They may not fully understand the thought that led to your idea. You’ve got to set it up for success, making it sound revolutionary. Make it seem like anything but your big idea would be disaster. When it comes to the presentation, an idea isn’t everything.
The objective matters
Every ad has a job to do. Your great idea should lead to action, interaction, or whatever the goal may be. An idea can be cool, but it also needs a nerdy side. A side that accomplishes the very straightforward and quantifiable goal put forth by the client in the first place. When it comes to building a brand, an idea isn’t everything.
There are a lot of factors that can make or break a campaign. Do all these things well, and your big idea becomes that much bigger. It also moves that much closer to becoming a reality.

You will never sell anything to a client by telling them, “It’s cool.”

Cool is not a reason any client will put their budget and their job on the line. Even if you’re doing ads for the new HALO game, a surfboard, or Porsche. In client parlance, “cool” is not shorthand for “it will sell your product, and make you money, keep your job secure, and maybe even get you an interview in Fast Company.”
Make your work cool. But before you present it, figure out the real reason it’s cool, and sell that.
You’ll not only have more success selling your ideas, you’ll become a better presenter.
About a year ago, I wrote this post on agency tenacity. Long story, short: Creative team comes up with a cool idea. Client loves it, but doesn’t make time or money for it. The agency, knowing a great idea when they see it, tenaciously pursues it with the client until the client capitulates. Then the client ends up using it all over the place – TV, t-shirts, banners, etc.. There was never a brief or a client request. Just a cool idea and a committed agency.
Seems now the client is using it on their own products. A very cool continuation of the story.

Remember, not every agency or every creative director will take a brilliant idea and push it forward like this. Make sure you find those that will.