Years ago, I took a fiction writing class in which we looked at some rough drafts of James Joyce stories and compared them with the finals. The thing that was most striking in this exercise was that Joyce often revised his work to make it more ambiguous. He made it less clear. More open to interpretation. Which was pretty counter-intuitive.

There’s a little diagram that I draw in my class when I’m trying to explain how an ad delivers its message. I usually get semi-blank stares, but hopefully this will make sense.

Imagine all the elements of an ad, everything that carries meaning, forming a circle. So, for simplicity’s sake, lets say you have an ad with a headline, visual and tagline. Here’s your circle:

Makes sense. The loop is closed.

Now, we’ve all seen ads that explain the visual, as if the audience is too stupid to put it together for themselves. The same diagram for a see-and-say, redundant, over-explained or dumbed-down concept would look like this:

And conversely, an ad concept that’s too obtuse, where the audience can’t figure out what the hell you’re trying to say, would look like this:

That’s no good either. It’s confusing.

The thing is, going back to Joyce, that first circle, where the loop is completely closed, that’s not the best kind of ad. It doesn’t leave any room for the viewer to enter into the equation. You want the loop there, but you need to trust that your audience is smart enough to close it. It doesn’t have to be a puzzle, but there needs to be that moment of insight, of “Ah! I get it.” When that little thing clicks, little bits of pleasure fill the brain and there’s a connection to the brand. The ideal circle looks more like this: 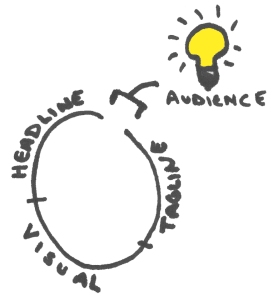 Here are a couple examples of great ads from the last couple years. They don’t explain everything. There are layers. Like returning to a great movie, every time I watch them, I notice something different. I feel involved. I feel like my intelligence has been respected.

The first time I saw this ad (and I’ll admit I wasn’t paying much attention), I thought: “Oh, wild kids grow up and play football.” The second time, I got the story, that it was LT and Polamalu and that they’d been destined for this moment their whole lives. The third time, I started noticing subtleties, like that LT was always moving to the right and Polamalu to the left, and how it captured the personalities of the players. My mom wouldn’t get this ad. She wouldn’t know who these two guys are. But this ad isn’t for my mom. It’s for football fans. I watch it, I pick up on these things, and I feel like it’s for me. Like I’m in on it. I’m a part of the circle.

Everyone’s seen this next one. A few months ago, I was at a planning conference (peeking behind the curtain) and, as an exercise, a room full of us were asked to break down the elements of meaning in this ad. The symbols. Like you’d analyze a film in a film class. It was amazing how everyone brought their own interpretations. Balls as pixels. Brilliant color. Sharp movement. Hyper-real. Surreal. Escapism. Watching the world through a window. The whimsy of children. Even things that people read into the choice of San Francisco as a shoot location.

Some of these were definitely planned during the production. Some probably happy accidents. But what’s important is that, again, it involves the viewer. A voice-over that said, “We see the world in pixels. In beautiful, brilliant colors. Full of movement…” would have ruined this spot.

So that’s my pitch here. It’s tough to explain to clients sometimes. The safe way to go is to make sure everything is crystal clear. That’s why some clients test the shit out of commercials. And that’s why testing commercials can suck the magic right out of them. Testing is about making sure all the loops are neatly closed. But some loops should be left open.

3 thoughts on “Not Closing the Loop”